The club returned with 5 golds, 1 silver and 1 bronze medal with some fantastic judo on display.

The first competitor of day was Luke Anderson competing in the kyu grade under 66kg event. He dealt with his four opponents with a mix of strong harai-goshi, uchi-mata and powerful groundwork techniques to attain the first gold of the day. Next was Charlie Johnson who was fighting in the under 42’s category. After a long, gruelling fight which lasted 8 minutes Charlie got the better of his first opponent due to hante (decision). He then had a second fight against a much more experienced player and held a good account of himself but was unfortunate to be defeated. In his final fight he achieved the victory with a powerful ashi-waza technique to attain the silver medal.

Moving on to the female categories the clubs first competitor was Keira Pentolfe in the girls under 36’s category. She began by dominating her first fight with strong seo-nage’s and then switching them to osotogari to score two wazaris, she won the second contest in similar fashion to win the clubs second gold of the day. Megan Quinn also competing for Battlehill went into her first fight against a more experienced opponent and was very unlucky to be defeated. She then fought another strong fighter who managed to beat her after a hard fought contest earning Megan a hard fought bronze.

The final competitor in the kyu grade category was Ellie Hutton who fought in a combined group being the lightest by far. She quickly won her contests with strong seo-nage techniques to defeat much heavier opponents. She then moved up to the senior women's category fighting people vastly more experienced and again heavier and defeated them to achieve her second gold after 7 impressive contests.

In the senior categories Battlehill had two competitors who hoped to achieve points towards their Dan grades. Josh Stoneman fought in the mixed 66kg and 60kg groups, fighting against strong opponents and managing to get the better of them with an impressive display of techniques ranging from katagaruma to osotogari to defeat 3 opponents and earning himself a gold medal and 10 dan grade points.

Charlotte Kendal dominated her group with fantastic gripping control and ashi-waza winning four from five contests picking up an impressive 40 points towards her Dan grade and another gold medal for the club. 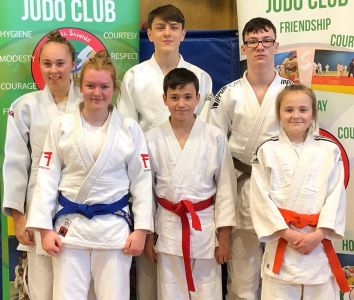