Battlehill Judo Club travelled to Walsall to join 321 other competitors from 109 clubs at the Midland Open Judo Championships.
Charlie Johnson took a big step up in experience at this high level event losing two and winning one contest with a strong Kesa Gatame technique.

Josh Stoneman looked on great form throwing his first opponent with Seio nage and Katagaruma techniques, he was unfortunate to be disqualified from his second and lost his third.

Ellie Hutton looked favourite to win the group after reaching the semi finals with some exceptional Judo, but lost to ne waza before throwing the bronze final opponent for ippon to return with a Bronze Medal.

Charlotte Kendal moved up a weight group, yet still managed to secure two wins from three with strong Uchi Mata and Tai Otoshi attacks to return with the Silver Medal.

A great weekend outing for the first major event of the year, with lots of great Judo on dislplay and lots of pointers to work on. 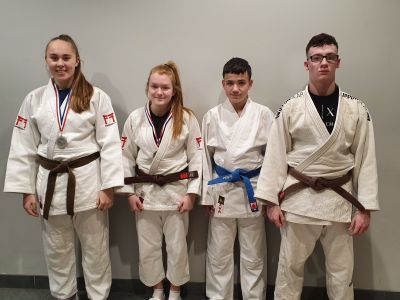