Ten students from Battlehill Judo Club travelled to the Kettering Sports Arena in Northamptonshire to compete in the British Judo Councils Open National Championship, which attracted almost 500 competitors. Following some excellent Judo and a fantastic weekend the club were extremely proud to return with 4 National Champions, 4 silver medallists and 1 Bronze Medallist.

Megan Quinn was first student to compete of the day for the girls 8-9yr, u44kg category presenting skill in groundwork fighting, winning her first fight with a solid hold, Megan narrowly missed in the final but earned a silver medal for her hard work.

Kiera Pentolfe showed determination having just moved up an age category to 10-12yr winning all of her contests in the pool stage and was defeated in the semi finals by the eventual winner to gain 3rd place Bronze medal in the u36kg category.

Jenni Francis in the 10-12yr girls u44kg group, remained undefeated after beating all four opponents by Ippon (Maximum score) she was announced as the National Champion with the Gold Medal.

Joe Flaherty competed in the O55kg, 10-12yr category suffering a single defeat by a referees decision but fought back to secure a well deserved silver medal.
Ellie Hutton competed in the girls u61kg event for 13-15yr. She impressively defeated all four of her opponents with Ippon, attaining a Gold medal and National Champion status.

Joseph Carroll fought well in the 13-15yr boys u50kg category against a tough group of fighters, but did not make it to the finals, losing his last contest with a very dubious illegal technique.

Luke Anderson returning to competition after injury showed great strength of character, stepping on the mat in the 13-15yr, u73 category and successfully overcame four opponents to gain a Gold medal and the National Champion title.

Charlotte Kendal had four contests in the 13-15yr over 65kg event displaying excellent efficiency in transitions from standing to groundwork contest, securing another Gold medal for the Club and was announced National Champion.

Josh Stoneman, aged 16, competed in his first Senior Men Brown Belt under 66kg group, displayed impressive skill in his contests and was defeated in the final to return with the Silver Medal. 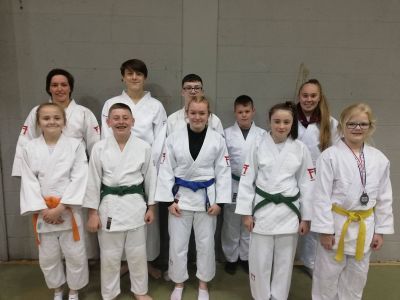 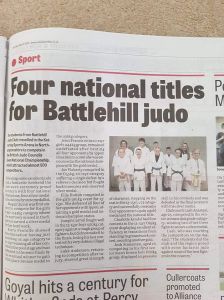